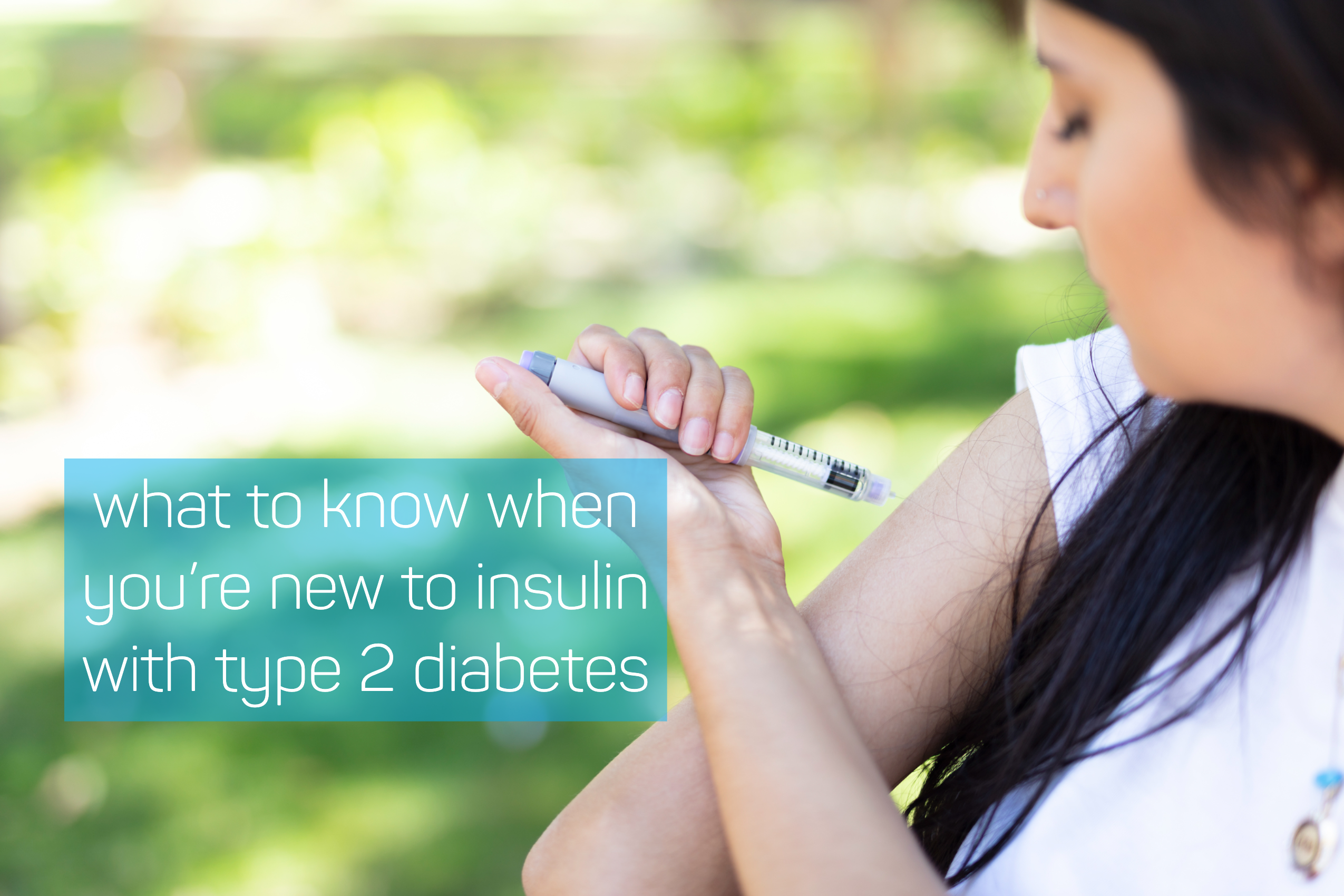 If you’re living with type 2 diabetes and are new to using insulin, you may wonder what you need to know. Using insulin can be complicated, and it’s normal to have some fear or discomfort about changing your treatment plan, but adding insulin to your regimen can be well worth the effort. With a little help, you can learn how to effectively use it.

Insulin is a hormone that helps your body regulate blood glucose levels by making it possible for your body to metabolize the glucose in your bloodstream for energy. By injecting insulin into your body, you are directly and immediately affecting your body’s glycemic load (i.e., glucose levels). Because of its immediate and direct effect, insulin is probably the most efficient way to bring glucose levels down into a recommended target range.

There’s evidence that early and aggressive insulin use by people with type 2 diabetes can result in effective glycemic control with minimal weight gain and hypoglycemia, while delaying insulin therapy for type 2 diabetes may result in exposing patients to a significant glycemic burden and increased risk of a large number of diabetes-related complications.

Adding insulin injections to your daily diabetes management is a major change that requires effort and learning. This can be made easier with the help of your medical team and diabetes peers. Remember that, when it comes to insulin, you don’t have to go it alone.

Begin with wrapping your head around the idea of using insulin

Being told you need to start using insulin shouldn’t come out of the blue. Hopefully, you and your medical team are having an ongoing conversation about your daily self-care, how effective it’s been, and what you can do to optimize your results.

Nevertheless, hearing that you need to start taking insulin can be a shock. Using insulin is going to be different from any of the things you’ve done so far to manage diabetes. That can be daunting.

Some people mistakenly understand using insulin to be a sign of failure. That’s simply not true. These people may feel guilty and wonder if they could they have done something to avoid using insulin.

The bottom line is that type 2 diabetes is a progressive disease. Many factors influence glucose levels (everything from stress and exercise to altitude and allergies) and no one can consciously manage all of these factors. When people feel like they could have done something differently to avoid using insulin, they can develop a psychological insulin resistance in addition to a physical one.

Another source of worry is the belief that insulin is dangerous and can cause complications like blindness or extremely low glucose levels (i.e., hypoglycemia). Insulin, like any medication, carries risks with it. Causing complications, however, is not one of them. Experiencing hypoglycemia, (i.e., a hypo) while taking insulin is possible though. Understanding the profile of the insulin you are using (i.e., its onset, peak, and duration) and how it affects your glucose levels puts you in a better position to effectively respond to any low glucose you might experience.

You will have to inject insulin into your body. For most people, injecting themselves is a new skill. The very thought of syringes and taking shots can be uncomfortable. Injection can be taken via injection (the typical method), with only one kind of rapid-acting insulin available in an inhalable form. Injections may be taken via a syringe, where insulin is drawn from a vial, or via newer, more discreet prefilled disposable insulin pens. Insulin can also be infused via an insulin pump, which is a kind of electronically-controlled syringe in a small device worn on the body. The idea of having to use needles can raise fears about it being painful or dangerous.

The difference between receiving an injection in another health care setting and taking insulin is that you are in control of when, where, and how the injection happens. You can learn what works best for you and avoid discomfort. You’re also injecting insulin with a very fine, short needle just under the skin, unlike injections from vaccines, steroids, or hormones that you may remember having been painfully given into a large muscle.

Learn what you need to know, but maybe not all at once

With insulin, you do have a lot to learn. In addition to how to give yourself injections, you’ll need to learn about the different kinds of insulin you’ve been prescribed, their different effects, how to determine your dose, and how to safely store and transport insulin. You’ll also have to manage the psychological effects that come with feeling overwhelmed, social stigma, and/or the fear of taking shots.

The very first thing you need to learn is what type of insulin you’re using and its profile. Are you taking a long-acting or rapid-acting insulin? How long does it take for the insulin to take effect? At what point is its effect strongest? How long does the insulin stay active in your body?

Then you can move on to understanding your individual insulin treatment regime and figuring out how to fit it into your day.

Insulin routines can vary greatly from person to person. Often, people with type 2 diabetes start with a single injection of long-acting (basal) insulin each day. Over time, the daily insulin routine can evolve to include several shots throughout the day at meal time of a rapid-acting insulin as well, a regimen which is referred to as MDI or multiple daily injections. The insulin dose taken may be a set dose that doesn’t change or it may be based on a glucose level and/or the amount of carbohydrates about to be eaten at a meal. Injections can also be made up of a single type of insulin or a combination of long- and rapid-acting (bolus) insulins. In some cases (like pregnancy or to bring down extremely high A1C results at diagnosis) insulin may be used for only a limited period of time.

Hypoglycemia, or very low glucose levels of 70 mg/dL (3.9 mmol/L) or below, may happen when too much insulin is taken. Extreme low glucose can be dangerous, resulting in mental confusion, blurred vision, or seizures and, in the very worst case, death. In responding to low glucose, the goal is to quickly bring glucose levels above 70 mg/dL (3.9 mmol/L) by eating or drinking something with fast-acting sugar in it, like a glucose tab or fruit juice.

Learning how to give yourself an injection is often a major stumbling block. As with most things in life, there’s more than one way to do it. You may need to try a few different approaches before you find one that you’re comfortable with.

In most cases, insulin pens are prescribed instead of syringes. Insulin pens hold the insulin in reservoirs (either prefilled or refillable) and the dose is measured out by turning the dial at the end of the pen a certain number of clicks. Insulin pens may make it easier to measure doses accurately. Being self-contained and looking like a marking pen, they are easy to take along in a purse or bag and are more discreet than insulin vials and syringes.

Syringe and insulin pen needles are available in a variety of sizes and lengths. If you’re feeling discomfort, talk with your medical team about using a different size needle.

These are just some of the ways people have found to make using insulin more comfortable and manageable. Tap into the knowledge and experience of your diabetes peers for more ideas, as well as actively working with your medical team.

Actively partner with your medical team to get the best results

Insulin therapy has a lot of moving parts, but also a lot of options to help you get the most out of using this therapy. To get the best results, it’s extremely important to work well with your medical team. This will help ensure that your diabetes care (including your insulin therapy) best serves your needs. Take an active role in determining and establishing your self-care routine.

At the start, your medical team will most likely decide your insulin treatment regime. But as you gain knowledge and experience, it’s important to maintain an active role in managing your own diabetes.

At Bigfoot, we’re developing tools with the vision that you won’t have to face insulin therapy alone. As a company founded by people who know and use insulin in our own daily lives, we want to meet you where you are and walk with you on your journey.

We wish you the best of success.