The Journey of Insulin 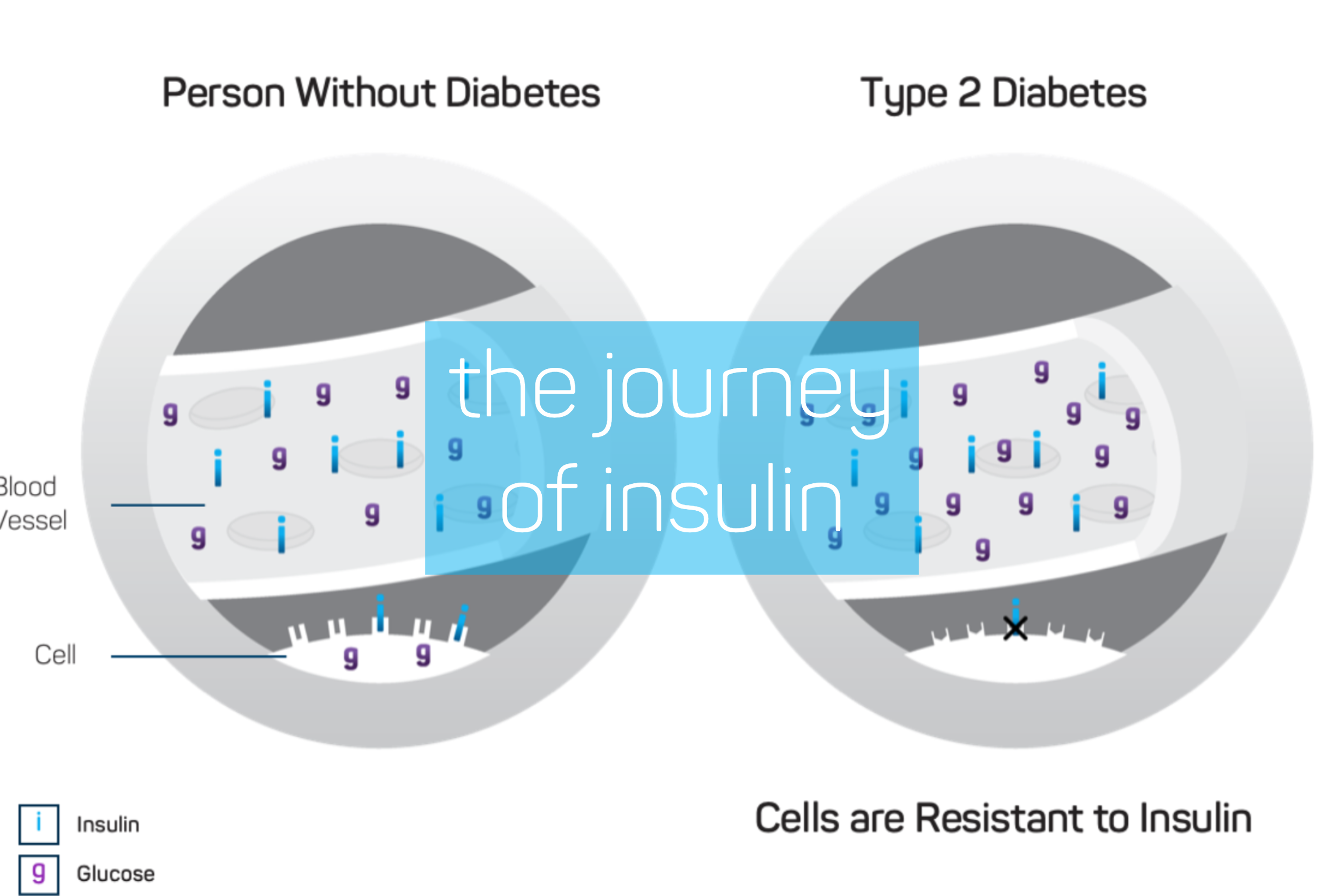 The Journey of Insulin

Insulin is a hormone that makes it possible for your body to convert the glucose from food and from stores in your muscles, fat cells, and liver into energy that your cells can use.

It’s hard to believe that less than 100 years have passed since the discovery of insulin. Even more amazing is that it only took about three years from uncovering how insulin works to making it available for everyday use.

In that short time a medical miracle happened. The death sentence that accompanied a diabetes diagnosis ended. Diabetes was transformed into a chronic illness that could be managed with daily use of insulin. It wasn’t a cure, but insulin therapy introduced a dramatic improvement for the people affected.

Lock & Key: Insulin is the key to metabolizing glucose

When food is eaten the intestines metabolizes carbohydrates, breaking them down and transforming them into glucose. That glucose then travels in the bloodstream to cells throughout the body, providing energy for the cells to function.

Insulin, which is normally released by the pancreas, regulates the blood’s glucose levels.  Insulin triggers cells to metabolize the glucose in the bloodstream, either using its energy straightaway or storing it for later use. How this process works is often described as insulin being a key that opens the cell’s lock, letting the cell take in energy from the glucose.

When the body doesn’t produce insulin or cannot effectively use the insulin it does produce, the glucose gets “locked out” of the cells. It remains in the bloodstream and cells are deprived of the energy source they need to function. This failure can lead to the unexplained weight loss that is a classic symptom of diabetes.

Without insulin to help metabolize it, all that unused glucose creates other problems.  Elevated glucose levels stress the body’s organs as the bloodstream circulates. The heart, kidneys, liver, and nervous system get overworked as they try to respond to the excess glucose in the bloodstream. This can cause, in the short term, the frequent urination and constant thirst that

Before insulin became available as a treatment, the standard treatment for diabetes was a strict, calorie-restricted diet mostly made up of protein and fats. While this diet succeeded in extending the lives of many people, it also kept them debilitated and on the brink of starvation.

Scientists understood as early as the 1860s that the pancreas plays a role in healthy glucose metabolism. A German medical student named Paul Langerhans identified two systems of cells in the pancreas. One, the acini, produces pancreatic digestive secretions. He wasn’t able to determine the function of the other, which was dubbed the islets of Langerhans.

By 1889 Oskar Minkowski and Joseph von Vering, German physiologists at the University of Strasbourg, demonstrated that a connection existed between pancreatic digestive secretions and diabetes. However, it wasn’t until 1921 that insulin was identified as the missing mechanism in diabetes’ failure to metabolize glucose in the bloodstream.

Dr. Frederick Banting, while in private practice also served as a senior demonstrator in medicine at the University of Toronto. While preparing a lecture on the function of the pancreas Dr. Banting read the then-recently-published article “The Relation of the Islets of Langerhans to Diabetes, with Special Reference to Cases of Pancreatic Lithiasis” written by Dr. Moses Barron. This article gave him the idea for an experiment to help determine the relationship between pancreatic secretions and diabetes.

Soon after coming up with his theory, Dr. Banting shared his idea with Dr. John Macleod, a Sottish physiologist and expert in carbohydrate metabolism at the University of Toronto. Dr Macleod agreed to give Dr. Banting access to a lab at the university and assigned Charles Best, a biochemist, to be his assistant.

The experiments involved tying off part of the pancreas in dogs, isolating the islets of Langerhans and collecting their excretions. These excretions yielded insulin which was then combined with saline and injected into other dogs whose pancreas had been surgically removed. Eventually, they were able to keep dogs without pancreases alive by injecting them with the insulin they derived. Banting, Macleod, and Best presented their findings at the end of 1921 at the American Physiological Society at Yale University.

Work in the lab continued the following year. Dr. Mcleod added biochemist James Collip to the team. Mr. Collip developed a process for purifying the insulin extracted which made human use possible. Humans were successfully treated with insulin and, in May 1922, Dr. Macleod, representing the group, announced the discovery of insulin as an antidiabetic agent at a conference of the Association of American Physicians.

By the end of 1923 Eli Lilly and Company had insulin, derived from pig and cow pancreas, in commercial production. Drs. Banting and Macleod also received the Nobel Prize in Physiology and Medicine that year. They shared their award money with Messers. Best and Collip.

The next major development in the journey of insulin came 60 years later when, in 1982, the FDA approved an insulin bioengineered using recombinant DNA technology and human genes. In this process a human insulin gene is inserted into a loop of bacterial DNA. That loop is returned to the bacterium it originally came from and placed in a fermentation tank to reproduce.

As a result, human-derived insulin became commercially available a year later in 1983.  The advent of human-derived insulin was significant for several reasons. First, producing insulin in a lab can provide a near infinite supply—one that isn’t dependent on livestock production as prior insulins were. Also, it has been reported that insulin based on human cells are less likely to cause an antibody (allergic) reaction.

On November 14th, the anniversary of Dr. Banting’s birth, we commemorate his discovery of insulin and the achievements of Dr. Macleod, Charles Best, James Collip, and all the other doctors and scientists who contributed to the discovery and development of insulin for the treatment of diabetes.